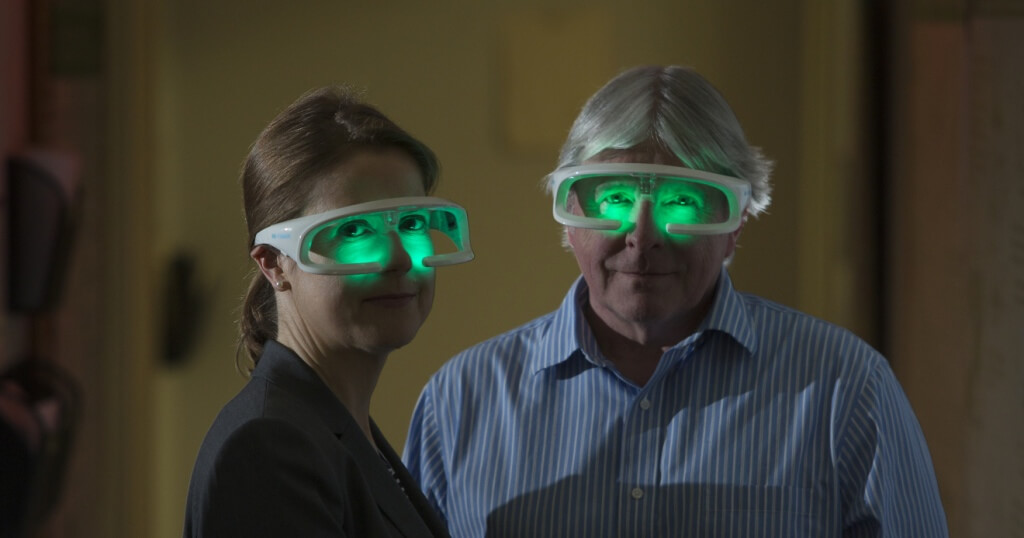 Can light therapy help people with chronic pain? We conducted a study to find the answer. You may wonder why such a possibility occurred to us.

We already know that light treatment — particularly light treatment in the morning — can reduce depression. This effect appears due to special non-visual receptors in the eye that transmit light straight to the amygdala, a key mood center in the brain.

We also know that when you improve mood, you can decrease or diminish pain, and improve people’s ability to cope and function with pain. On the other hand, medications often prescribed for chronic pain, including antidepressants and antiseizure medications, can have only small effects on pain, and that the side effects are significant enough that many people stop taking them. Finally, we know that opioid medications carry many risks, and patients are looking for affordable non-drug treatments that they can use in their own homes.

Ten women tested
With these considerations in mind, we ran a pilot study to test if light treatment could help people in chronic pain. We enrolled 10 women with fibromyalgia — a condition characterized by chronic widespread pain — into a two-week study. For the first week, the women slept at home as per usual. Then we brought them into the Rush Sleep Disorders Service and Research Center and asked them to report on their baseline function by completing the Fibromyalgia Impact Questionnaire. This assessment asks about daily tasks such as how hard it is to walk several blocks, climb stairs and drive a car.

Then we measured their baseline pain sensitivity using a computer controlled heat test. A thermode was placed on their inner forearm, set to 32 °C, and then steadily ramped up at 0.5 °C/sec.We asked each subject to report two things: the time when it stopped just feeling warm and became painful (“heat threshold”) and the time when they could not tolerate the heat anymore (“heat tolerance”).

In addition, we measured the baseline timing of their internal body circadian clock by collecting saliva samples in dim light for about six hours before their usual bedtime. The saliva samples were analyzed for melatonin, a hormone tightly controlled by the circadian clock in our brain that helps set the timing of each individual’s internal body clock. Morning light is believed to reduce depression more than evening light, in part because morning light shifts the body clock earlier, and we wanted to measure this effect.

The next day, we took light boxes (UV-free) out to the patients’ homes. This visit to the subjects’ homes gave us useful insights into these people’s living environments, what challenges arise in the home environment, and how light therapy can be used in the home.

Night and day
On arrival, we noticed many subjects lived in very dark houses, having covered most of their windows. Most of them reported not liking sunlight, and yet were still interested in trying the light boxes. The subjects needed somewhere comfortable to sit in front of the light box for an hour every day, and this place usually was their couch. Most of them wanted to watch television during their light treatment, so we set a light box on either side of them, with a gap in the middle through which they could watch their TV.

We checked the light boxes and found that the subjects had done a great job — on average, they got 84 percent of the light we asked them to get. After the light treatment, the subjects came back to the lab, and we reassessed their pain sensitivity and circadian timing.

We found that after only six days of light treatment, all subjects felt better, but the subjects who received morning light treatment felt markedly better. Their pain sensitivity on the heat test significantly improved (that is to say, it decreased) and they showed a 24 percent improvement on the Fibromyalgia Impact Questionnaire. Any improvement above 14 percent is considered meaningful.

The improvement was about equal to that seen after cognitive behavioral therapy that psychologists administer to teach patients how to better cope with pain. The improvement was also about half of that seen after weeks of intense exercise therapy. Interestingly, the more the morning light shifted the circadian clock earlier, the better the results.

Ongoing investigation
Given these results, are we ready to manage chronic pain with light treatment? Not quite. Our study sample was very small, and the results simply suggest that we keep investigating light treatment as a possible treatment to reduce pain and improve function. We were able to use the study results to obtain NIH funding, and we currently are testing a morning light treatment in U.S. veterans with chronic low back pain.

From these studies, we have learned that while people like the light treatment, sitting for an hour every day in front of a light box is a significant time commitment. In response, we have started to explore wearable light treatments that have recently become commercially available — the Re-timer and Luminette devices. We hope to test these devices in future larger studies to test light treatment alone, and potentially in combination with other treatments.