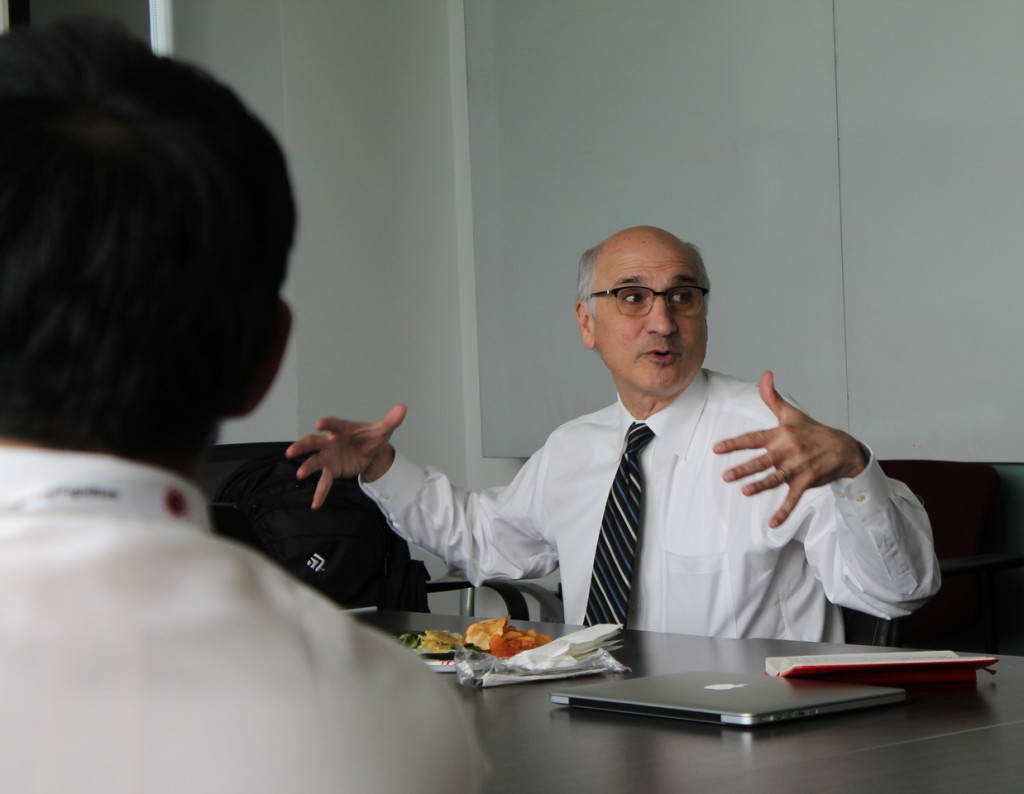 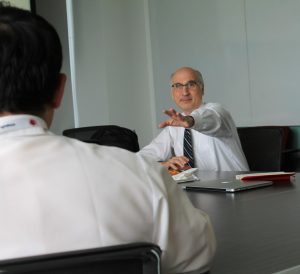 Alverdy, who introduced operations like bariatric and minimally invasive esophageal and biliopancreatic surgery, spends time at both the science bench and patient bedside as a clinical gastrointestinal surgeon and researcher doing breakthrough work into the pathophysiology of GI disorders at his NIH-funded laboratory.

But Alverdy told the ITM attendees that his career path, like many others, was a “strange odyssey.” He wasn’t even planning on going to medical school until after he became sick while visiting a cousin in Mexico.

“I got very interested in gut microbes because I contracted several of them,” Alverdy said. “And when I talk to people like myself, they always talk about what an odyssey it is that they ended up where they ended up. The transition to R funding is often not the linear path that it is made out to be.”

Alverdy shared his research with the group as they enjoyed catered sandwiches, salads and desserts.

“I study that physiologic stress releases host compensatory local cues,” Alverdy said, clicking through slides detailing his research. “And those cues are taken up by bacterial information processing systems. You activate these quoru 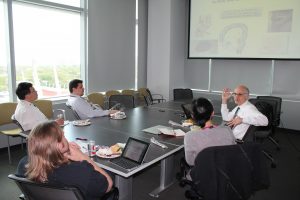 m sensing signaling systems in bacteria and then you observe
them to display what we call assemblage behavior. These bacteria can now assemble as an entire community. And then you get what we call context-dependent virulence expression.”

But he also laced his lecture with career wisdom, telling everyone to be ready for rejection.

In his case, he said he wrote a great E. coli grant that was rejected because the reviewers said E. coli was not a pathogen – a position that has been proven false.

“You’re going to get a grant that comes back and a person is going to say, ‘This hypothesis is u
ntenable and it will not work,’” Alverdy said. “And they’re going to be dead wrong.”

Alverdy advised attendees to get their clinical trials going as soon as possible and to stay in an uncrowded space. 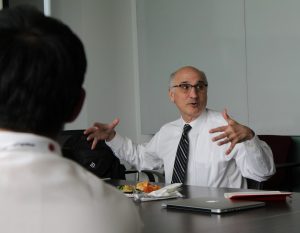 “The game today is not just to obtain an R01, but sustained R01 funding so your lab goes on for 20 years,” he said. “Whatever specialty you’re in, you need to really be careful to know that only you can answer the question you’re asking.”

Philip A. Verhoef, MD, PhD, attended the seminar and said he already scheduled a follow-up meeting with Alverdy to talk more.

“His work is pretty similar to the kinds of research questions I want to ask,” Verhoef said. “So for me, personally, it was really important that I have the chance to hear about what he’s doing in such a nice, small setting.”

“Dr. Alverdy gave us an excellent example to choose your scientific field wisely, and you need to believe yourself and not be afraid to face the challenge,” Liu said.

While everyone has a mentor in their departments, Alverdy said events like Monday’s lunch give people a chance to hear from someone completely outside of their normal space.

“There are few opportunities here to see people completely out of your area of specialty and interact with them in a more intimate setting like that,” Alverdy said.

Contact Regina Kinyui to obtain information on the next Career (K) Award Seminar or to get involved in the seminar programs.