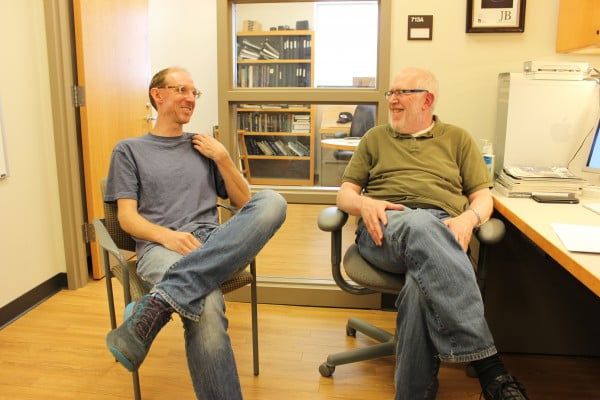 Shuman and Crosson catch up in Shuman’s office. Photo by Sahar Mozaffari

Investigators from the Institute for Translational Medicine (ITM) have teamed up to repurpose generic and over-the-counter medicine to treat diseases people catch from bugs and animals. In general it can take billions of dollars and decades to make drugs and get approval from the U.S. Food and Drug Administration (FDA), and applying these well-studied and safe medications to cure other conditions would make treatment more affordable and accessible worldwide.

“What if we could give someone medication we can buy off the shelf from Walgreens to treat their infection?” said Sean Crosson, PhD, Professor in the Department of Biochemistry and Molecular Biology.

Each year in America alone, tens of thousands of people get sick from zoonotic diseases, which are caused by viruses, bacteria, or parasites that have been transmitted directly from insects or animals, according to the CDC. About 60 percent of microorganisms that cause human diseases are zoonotic.

Crosson investigates the growth of bacteria in a petri dish under the hood. Photo by Sahar Mozaffari

Crosson and Howard Shuman, PhD, Professor in the Department of Microbiology, formed Host Targeted Therapeutics (HTT) to fight these diseases in an efficient, affordable way. The pair and their teams are testing how well common medications for conditions like high blood pressure can kill bacteria in human cells.

And they’re doing it fast, thanks to an interactive platform created by the Center for Research Informatics (CRI) Bioinformatics Core that is supported by the ITM.

Last year they took 640 FDA-approved drugs and analyzed whether they could treat the following conditions:

*    Legionella pneumophila – causes Legionnaire’s disease – a severe form of pneumonia that affects the lungs and causes shortness of breath, chest pain, and a cough that could bring up mucus or blood – acquired by inhaling water droplets containing the bacteria.

*    Rickettsia conorii – causes Mediterranean spotted fever – symptoms include a fever, rash and a small black ulcer at the site of the infection – infected from tick bites.

They found that the antidiarrheal drug loperamide and some generic antipsychotic medications could indirectly kill the bacteria by altering the cell structure through cholesterol modifications. These changes do not harm the host cells but make it harder for the bacteria to stay alive, and they published these findings in the July 2014 edition of mBIO.

They also discovered that some of the drugs combatted a pseudotyped Ebola virus, working in partnership with Balaji Manicassamy, PhD, Assistant Professor in the Department of Microbiology.

While repurposing drugs is not a new idea, Crosson said that through the University of Chicago they have rare access to Argonne National Laboratories’ Howard T. Rickett’s Laboratory (HTRL) that holds special bacteria that require unique biosecurity and biosafety measures. The HTRL is one of only 13 National Biocontainment Laboratories in the country and maintains a license to work with bacteria on which no one has yet tried repurposing drugs.

HTT stemmed from an obstacle to studying the genetics of the bacteria Legionella pneumophila and other infectious bacteria. These bacteria are able to trick host cells that would otherwise destroy them into letting them live and giving them a nutrient-rich environment to grow.

“What if we could do something to the host cell to make it resistant to bacteria?” Shuman said, a question that led to HTT.

Their first idea to remove certain genes in the host cell was not successful because it no longer allowed for the bacteria to enter the host cell. Their second idea was to use known small molecules to prevent the growth of bacteria inside the host. From that list of small molecules, they excluded antibiotics, which kill any bacteria, as well as other toxic molecules, such as those used in chemotherapy that kill the host cell.

While trying to understand the genetics of L. pneumophila, Shuman identified molecules that exist in generic medication that kill the bacteria in the host without hurting the host, and HTT was born.

Last winter, HTT took advantage of the Polsky Center I-Corps Program run by ITM affiliate the Polsky Center for Entrepreneurship and Innovation and the National Science Foundation (NSF) to help scientists test the commercial potential of their research or idea.

Daniel Czyz, PhD, a postdoctoral scholar in the Departments of Microbiology and Biochemistry and Molecular Biology, helped bring HTT to the Polsky Center I-Corps Program and said that it gave them a roadmap for how to grow.

“It gave us an introduction toward skills that can be used in a science startup business,” said Czyz. “Now we know exactly what next steps to take, and they have mobilized us to talk with pharmaceutical companies and the government, which has opened up more opportunities for funding.”

As basic scientists, Shuman and Crosson said they never expected to be applying their research to create a startup company and found the Polsky Center I-Corps Program useful in navigating the new territory.

“Basic discoveries emerge from strange places, so you never know where new applications in translational medicine are going to come from,” Crosson said. “The concept is simple, but what it entails to make it translational is pretty complicated.”

Focusing on major diseases that strike worldwide was one helpful suggestion the HTT team gleaned from the Polsky Center I-Corps Program, Shuman said.

“We’re going to expand the study to analyze diseases with global health impacts, such as tuberculosis,” said Shuman.

The team is using a $15,000 grant it received from the Chicago Biomedical Consortium (CBC) in July to do just that and look at the effectiveness of other medications.

“The University of Chicago provides a collaborative environment for projects such as this to have the highest success rate,” said Czyz, who applied for the CBC grant with Jonathan Willett, PhD, a postdoctoral fellow in the Department of Biochemistry and Molecular Biology. “Programs like the Polsky Center I-Corps Program and ITM help us move things forward, connect us with people, and translate discoveries to clinical settings.”

Bacteria growing in a petri dish on sheep’s blood. Photo by Sahar Mozaffari

So far these studies have been done on cell lines in petri dishes, but HTT has plans to collaborate with ITM investigator Eugene Chang, MD, Professor in the Department of Medicine, to extend the studies to an animal model, and the team is also working with ITM Co-Director Julian Solway, MD, Professor of Medicine and Pediatrics, on pathways to evaluating the impacts of the repurposed drugs on people.

The team is also working with Andrey Rzhetsky, PhD, Professor in the Department of Medicine, to use existing patient databases to test whether the incidence of infection is lower in patients taking some of the molecules they identified in their study.

“This could be the new revolutionary method to treat bacterial infection,” Czyz said. “With one treatment to target human cells to make them more resistant to infection and another targeting the bacteria itself, we could shorten the duration of infection and increase survival rates.”

Want to get involved with HTT? Contact ITM investigators Sean Crosson at scrosson@uchicago.edu and Howard Shuman at hashuman@uchicago.edu.

Have a science project that needs funding to get off the ground?

Click here to explore what the ITM can do for you.

Do you have a research idea that you want to commercialize?

Click here to learn more about and apply to the Polsky Center I-Corps Program.