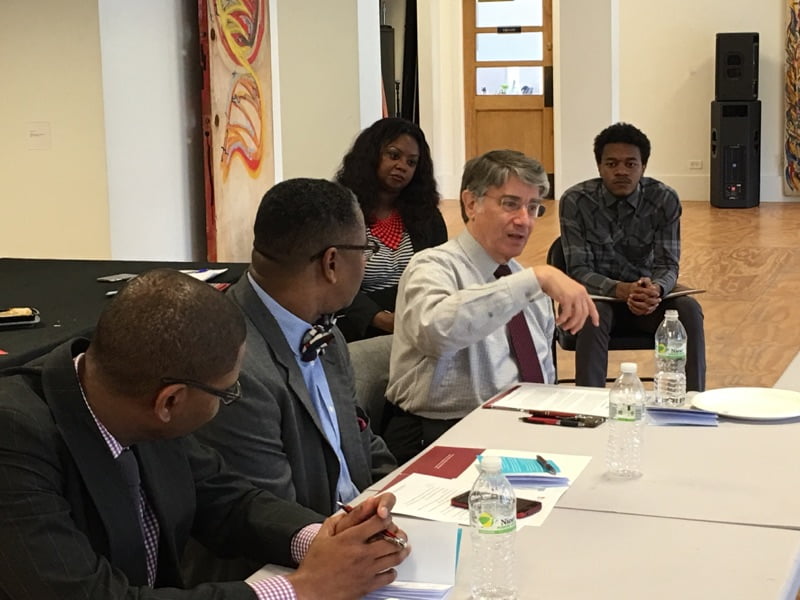 UChicago ITM Co-Director Julian Solway talks during the ITM’s On the Table lunch as part of the city-wide Chicago Community Trust (CCT) event.

As part of the Chicago Community Trust (CCT) city-wide On the Table event May 10, the University of Chicago Institute for Translational Medicine (ITM) hosted almost a dozen people to brainstorm ways to better work together to improve people’s health.

Read more here about On the Table, which brings thousands of people across Chicago together on one day each year to discuss ways to make the city we call home a better place.

Allison Wojtowicz currently is the Quality Assurance and Compliance Coordinator at Common Threads, a national nonprofit that aims to educate low-income children on the importance of nutrition and physical well-being, empowering them to be agents of change of healthier families, schools, and communities. In her role, she is responsible for supporting program and market expansion efforts through maintaining and building GIS tools, gathering stakeholder feedback on the programs, and coordinating MOU and partnership logistics. She also ensures the highest level of compliance in external evaluation and professional development standards in each national market.

Allie Koolbeck is the Grant Writer at the national nonprofit Common Threads, which educates low-income children on the importance of nutrition and physical wellbeing. Prior to Common Threads, Allie worked at a youth development agency in Evanston, IL, first as a Project Manager, supporting programmatic and organizational efforts, and then as Grant Writer.

Ernest Sanders functions as the Founder and Managing Partner for COMEUNITY Based Solutions. Sanders is a business professional of more than 30 years and has worked on national causes to reduce recidivism, enhance middle school education and social services, and promote digital excellence in lower income
populations.

Alicia Sams Director, Speaker Series, Institute of Politics, U of C, comes to the IOP with over 20 years of experience producing and directing award-winning documentaries and feature films for television and theatrical release. She has worked on films covering politics and public affairs, the arts, and cultural history for distributors including HBO, IFC, PBS, AMC, Sony Pictures Classics, Sundance Channel, Koch-Lorber, and BBC. From 2006 to 2008, she chronicled the presidential campaign of then-Senator Barack Obama for HBO, a journey depicted in the Emmy Award-winning film “By the People: The Election of Barack Obama.” A frequent panelist and lecturer at festivals, colleges and universities around the country, Alicia is a native of Washington, D.C. and holds a BA in English from Harvard University.

Shaka Rawls is currently the School and Community Administrator at Edmund Elementary School in the Washington Park Community. He is currently in his last year of his Ph.D. program at the University of Illinois at Chicago where he studies the intersectionality of community and school, and expecting to defend in August of 2017. Mr. Rawls is also a strong supporter of the mission of Leo High School he and fellow Alumni has raised thousands of dollars in the past three years to help boys become strong Leo men. Mr. Rawls is a tireless advocate for educational change, rooted in community support.

Gregory Kelley Executive VP of SEIU Healthcare IL. Greg Kelley brings a passion for social and economic justice to the position of Executive Vice President of SEIU Healthcare Illinois, Indiana, Missouri & Kansas. Motivated by his faith tradition and coming from a family of Baptist pastors, Kelley views building power for organized labor as his form of ministry. Born on the West Side of Chicago and growing up in Maywood, Ill., Kelley started his career in the labor movement as a worker in the Cook County Clerk’s office where he organized co-workers to improve workplace conditions. With his leadership potential recognized, he went on to work as a union member-intern before being hired as an organizer for the former SEIU Local 46. He successfully organized the first union of museum workers in Chicago at DuSable Museum.

Dr. Pamela C. Phoenix, CEO/FOUNDER Dr. Phoenix is the CEO of Phoenix Diverse Holistics Collaborative (PDHC), an innovative nonprofit holistic health organization that supports the needs of the whole family in mental, physical and emotional wellness. She is a consultant for a few Community based agencies and Chicago Public Schools. She has appeared on a number of radio and television shows as host and guest for topics such as primary prevention, lead poisoning prevention, restorative practices, boys and girl’s sports, entrepreneurship, empowerment, women’s health, Sankofa rites of passage, yoga, martial arts and other natural approaches to health. Dr. Phoenix is Author of “That Girl Can Cook.” She has appeared in the Chicago Sun-Times Food Section and was featured on WGN-TV’s Morning Show for healthy eating. Her running theme is “the way you feel right now matters.”