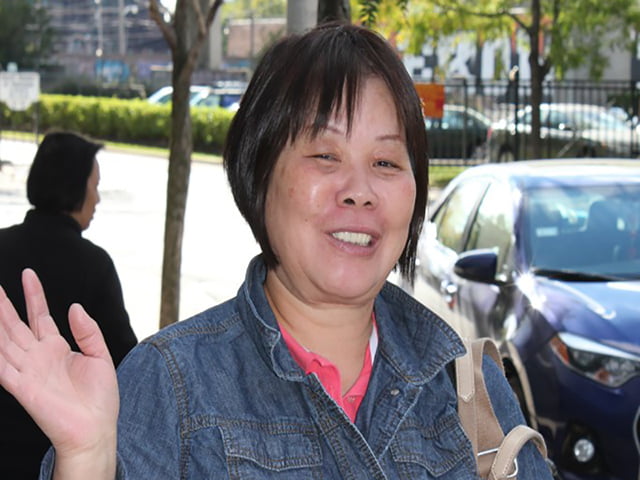 Diabetes is the fifth leading cause of death among Asians, and Chicago’s Asian Health Coalition is  improving the health of those with the disease. Photo by: Ana Shulla-Mesi/UChicago ITM

Jin Xiao Mo Liang, a 53-year-old Chinese native, said she was surprised when she was diagnosed with Type 2 diabetes two years ago.

“When I was young living in China, I was slim and I would eat anything,” Liang said through Eliza Chan, a translator with Chicago’s Chinese American Service League (CASL).

About 1.7 million adults were diagnosed with Type 2 diabetes in 2012, according to the CDC, and about 1 in 3 people like Liang will develop the disease in their lifetime. She started taking medicine that her doctor prescribed, but she speaks limited English and didn’t understand that there was more to controlling the disease than just taking medicine. Her habit of eating out seven days a week continued, and she said she soon lost control of her blood sugar levels despite the pills.

Liang shares what she has learned and now cooks for her mother, who also has diabetes. Photo by: Ana Shulla-Mesi/UChicago ITM

To help those like Liang, the Asian Health Coalition started a new Diabetes Prevention Program for Asians in Chinatown (DPPAC). Through this program, Liang learned how exercise and the food she eats impact her health – all taught in her native language. At the start of the program, Liang’s blood A1C levels, a common test to gauge the management of diabetes, were around 8.5. After completing the program, her blood sugar is under control and her A1C levels are down to 6.2, within a pre-diabetic range.
About 10 percent of Chicago’s Chinese Community has Type 2 diabetes, according to the Chicago Asian Community Surveys research initiative, and it is the fifth leading cause of death among Asians. Patients with this form of diabetes do not respond to insulin properly, but lifestyle changes like eating healthy and being active can help control the disease. And research shows that patient education is key to that self-management.

The Asian Health Coalition launched DPPAC in 2014 thanks to a $29,500 grant from the University of Chicago Medicine (UCM) Community Benefit Grant Program’s joint initiative between the Institute for Translational Medicine (ITM) and the Urban Health Initiative (UHI) to tackle adult diabetes and pediatric asthma and obesity in South Side residents – three prevalent conditions identified by a 2012 UCM Community Health Needs Assessment. In just over a year, this initiative has awarded more than $280,000 to nonprofit leaders and their UChicago research collaborators to propel their innovative work in those areas and evaluate its impact.

“The grant was instrumental in launching an educational program that has already impacted many lives,” said Katherine Mueller-Demos, MPH, Program Manager for Diabetes Prevention and Access to Care Projects at the Asian Health Coalition.

DPPAC is tailored to serve the Chinese community both with the native language in which it’s delivered and with community feedback applied to their programming.

About120 community members attended a forum held in 2013 at the CASL site led by ITM investigators and Community Cluster Co-Leaders Deborah Burnet, MD, and Karen Kim, MD, where attendees learned about diabetes and talked about its burden on Chinatown. The presenters made their slides simple in a way that foreign-born, non-English-speaking Chinese immigrants with low health literacy could easily understand. Attendees responded to interactive questions in real-time using electronic clickers.

With help from the Asian Health Coalition, Jin Xiao Mo Liang now has control over her blood sugar. Photo by: Ana Shulla-Mesi/UChicago ITM

Based on those responses, the Asian Health Coalition and the UChicago faculty designed a diabetes self-management curriculum targeting the Chinese immigrant population for a six-week workshop in the summer of 2014.

Liang, who was one of the 40 workshop participants, said that she did not have access to any diabetes education materials in her native language before the DPPAC.

After the workshop, Liang said she cooks at home, eats more fruits and vegetables, and has

increased her physical activity – all helping her to lose 20 pounds.

“Now I better manage my food intake,” said Liang, who received calls from the DPPAC after the workshop ended to check-in on how she was doing.

“I now cook for my diabetic mother,” she said. “It has helped keep her blood sugar levels normal, too.”

Get involved with the Asian Health Coalition by contacting Katherine Mueller-Demos, Program Manager for Diabetes Prevention and Access to Care Projects, at katherine@asianhealth.org.